I am currently researching the life of Ms. Agnes C. L. Donohugh for a chapter I’m writing 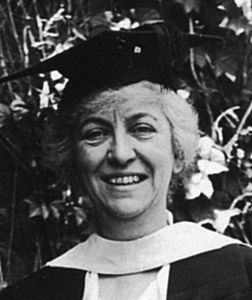 with some anthropologists and theologians.  I’m the lone historian of the bunch, but it’s a great bunch.  I sort of stumbled upon Agnes Donohugh in the process of doing some other related research, but I think she was the first American missionary to take a university-level Anthropology course prior to serving as a missionary overseas (with the Methodist Episcopal Church).  She went on to be the first American missionary to receive a graduate Anthropology degree from Franz Boas, the so-called “father of American Anthropology.”  She was also most influential in crafting the shape of anthropological training for missionaries between World War I and II.  In spite of these contributions and notable “firsts” hardly anyone has ever heard of her.

There are several reasons for her forgottenness.  At Hartford Seminary’s Kennedy School for Missions (where she taught from 1917 to 1944) she was always the less famous person teaching anthropology courses even if she did it longer than anyone.  British anthropologist/missionaries Edwin W. Smith and William Willoughby both published more books, were older than she was, and were, well, men.  It didn’t help that Agnes had a master’s degree from Columbia University and not a doctoral degree in an age when Anthropology as a field was increasingly becoming professionalized in such a way to exclude people from anthropology circles who didn’t have a Ph.D.

On a recent research trip to Columbia University it was a rather fitting – if frustrating – testimony to Agnes’s “forgottenness” that I learned that her 1917 master’s thesis was rather difficult to find.  It had no call number.  Conversations with four different and helpful university librarians finally yielded fruit, and I have been assured that they will be able to find it somewhere off-site.  Even her correspondence with Franz Boas – limited though it is – is proving a bit difficult to get my hands on through another archive.  But this is all part of the task of historians and, admittedly, these challenges are pretty mild compared to the sort of detective work many historians working on many other projects have to do on a routine basis.

Agnes Donohugh was more of a teacher than a scholar, although her contributions as a scholar are not, it turns out, insignificant.  (You’ll have to wait for my chapter to get done for me to elaborate on that.) She readily acknowledged at the end of her twenty-five year teaching career at the Hartford Kennedy School for Missions that she “never had time to write books.” She held many ideas about anthropology and Christian mission loosely such that she always considered them subject to alteration.  I sympathize with Donohugh in many respects.  My contributions, like hers, are far more likely to be recognized in the classroom or in the occasional “thank you” from a former student than in some future retirement banquet at the American Society of Church History where renowned professors are often rightly honored.  And I am OK with that.  I cherish my students’ “thank you’s” deeply.  I have a hunch that Agnes Donohugh did as well.

It is for this reason that I spent the better part of a sunny March Monday in the cold basement of Hartford Seminary’s library paging through twenty or so dissertations from the 1930s which I thought might mention Agnes Donohugh in the Acknowledgments of their work.  (Most of these dissertations actually didn’t have an Acknowledgments section unlike dissertations of today.) I was looking for hints of what her students thought of her.  After several hours of doing this I realized that I was researching the history of gratitude in Agnes’s life.  While tedious, I was struck by the beauty of that.

Today, I was grading papers from my United Methodist History and Early Doctrine course, and a common quotation from Wesley’s sermon, “The Scripture Way of Salvation,” one student commented on struck me with renewed force.  In describing what sanctification was all about, Wesley famously wrote that “It is love excluding sin; love filling the heart, taking up the whole capacity of the soul. It is love “rejoicing evermore, praying without ceasing, in everything giving thanks [emphasis mine].” In everything giving thanks…  Indeed, gratitude is a marker of one’s sanctification.   Gratitude given and, perhaps, gratitude received.

Many have noted that gratitude lies at the foundation of so much of life.  There are around thirty Psalms of Thanksgiving in the Bible.  Maybe I should consider brief sentences thanking Agnes Donohugh as little sonnets of thanksgiving as well.  Seen in that way, the day spent searching the Acknowledgments and other parts of eighty-year-old dissertations for hints about this forgotten anthropologist and mission professor does not seem so misspent after all.  Now, if only I could have the same attitude toward my unmarked papers I’ve yet to grade…

From 2005 to 2016 I served as Associate Professor of Christian Mission at Palmer Theological Seminary, the seminary of Eastern University in Philadelphia. From 2016 to 2020 I served with the same title at George Fox University. In 2020 I moved to Seattle, Washington where my spouse, Laura Hartley, will be serving as Provost at Seattle Pacific University. The best email with which to reach me is now hartley.benj@gmail.com
View all posts by Ben Hartley →
This entry was posted in Uncategorized. Bookmark the permalink.

1 Response to On Researching Forgotten Gratitude